Bedell Hosts “Behind the Scenes” Tour of Bedell Building 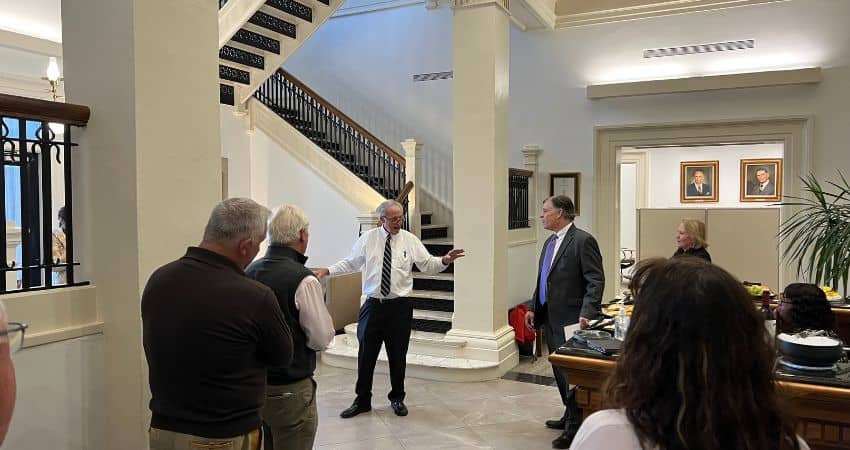 Bedell Firm hosted a “Behind the Scenes Tour” of the historic Bedell building alongside fellow Cathedral District board members. Attending guests included existing and prospective members of the Cathedral District.

About the Cathedral District

The Cathedral District constitutes 36 city blocks encompassing the 5 major downtown churches and the Bedell Building. Fellow members of the Board of Directors Ginny Myrick and Gregg Kaufman opened the tour by welcoming guests and providing a brief overview of the Cathedral District’s mission. The non-profit seeks to renew the district and achieve a thriving neighborhood that appeals to a broad cross-section of residents.

At the start of the tour, Al Brooke brought everyone outside to take a look at the capitals on the building’s columns. The sixteen images include well-known novelists (Charles Dickens, Mark Twain), dramatists (Aeschylus, Shakespeare), and poets (Virgil, Dante, Blake), both ancient and modern.

Hank Coxe provided a synopsis of the Bedell building’s history. Architect Henry Klutho became quite popular in the Jacksonville area after the Great Fire of 1901. He went on to work with well-known investor Andrew Carnegie to construct the Jacksonville Public Library building. When Bedell bought the building from the city of Jacksonville in 1984, there were many discoveries made including the Tiffany Skylight displayed at the height of the arches on the second floor.

Before walking through the building’s halls and corridors, attendees engaged in an open forum discussion. Ted Pappas, the architect who renovated the building after its purchase, was a popular person of interest. He revealed that almost every facet of the building was original and that his main task was to uncover, preserve, and restore. Bedell had the chandelier in the lobby manufactured as an exact replica of the chandelier which hung in the dome of the old Capitol Building in Tallahassee.

As the oldest law firm in continuous existence in the State of Florida, Bedell Firm has a long-standing history of providing high-quality legal services to our clients in the areas of civil, criminal, and family law litigation. If you have a legal matter that requires significant experience, contact Bedell at (904) 353-0211.