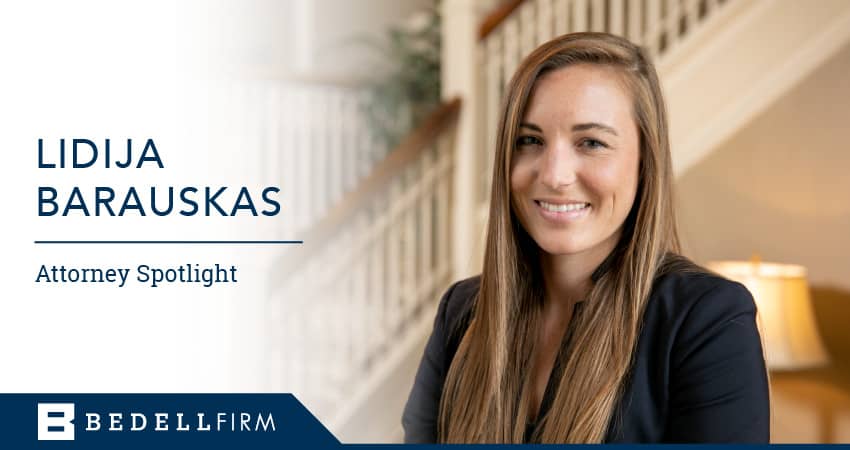 Bedell Firm attorney Lidija Barauskas began her career as an Assistant State Attorney in Pensacola, handling both misdemeanor and felony cases.  Lidija has practiced criminal defense law at the Bedell Firm since 2019.

Lidija graduated from Emory University in 2012, majoring in Psychology and Spanish.  She attended Florida State University College of Law, receiving her J.D. in 2015.  After working in Pensacola, Lidija moved to Jacksonville, continuing as an Assistant State Attorney in the Fourth Judicial Circuit.  She handled misdemeanors, felonies, and cases in the Special Victim’s Unit.

Lidija grew up in Treasure Island, Florida.  She has played soccer her whole life and continued to play at the collegiate level at Emory University.  Her college soccer career ended with seven goals, four assists, and included game-winning scores and goals in NCAA Championship games.  Lidija continues to play for several recreational teams across Jacksonville.  When not playing soccer, she enjoys spending time with friends, family, and her dog Rosie.

Lidija gained significant trial experience as a prosecutor, sitting both as first and second chair in cases, including DUIs, aggravated batteries, burglaries, thefts, and vehicular homicides.  At Bedell, she handles a variety of criminal defense and Florida Bar-related cases.

Like all attorneys at the firm, Lidija is active in professional organizations and community events.  She was a member of the Chester Bedell Inn of Court from 2018-2019.  She participates with Jacksonville Bar Association events, such as the Young Lawyers Section Charity Chili Cook-Off and the recording of the Basic Criminal Law CLE for new attorneys.  She is an active participant of the Jacksonville Women’s Lawyer Association.

As the oldest law firm in continuous existence in the State of Florida, Bedell Firm has a long-standing history of providing exceptional legal services to our clients. Our core practice areas include civil, criminal, and family law litigation. If you have a legal matter that requires a depth of experience in the matter, contact the Bedell Firm at (904) 353-0211.

Happy Holidays from the Bedell Children