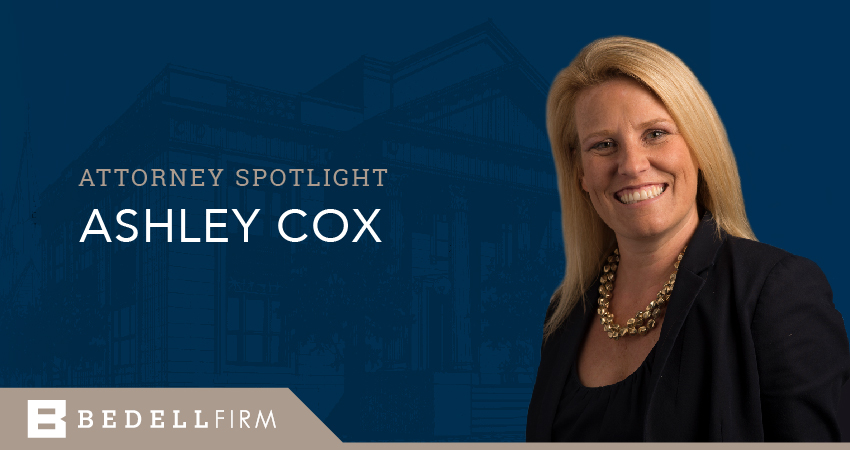 Attorney Ashley Wells Cox serves as a director (partner) at the Bedell Firm, specializing in family law, criminal defense, Florida Bar disciplinary defense, and administrative licensure defense cases. After graduating magna cum laude from Duke University in 1997 with a Bachelor of Arts in Public Policy Studies, Cox attended Northwestern University School of Law, where she graduated with honors in 2002. Cox was admitted to the Georgia Bar in 2002 and the Florida Bar in 2005. She is also a member of the U.S. Federal District Court for the Middle and Northern Districts of Florida. She has been an attorney with the Bedell Firm since 2006.

After graduating from Duke University, she spent two years teaching on the Southside of Chicago in the Inner City Teaching Corps. She then stayed in Chicago for law school. While attending Northwestern University School of Law, Cox was appointed to the Order of the Coif, chaired the Student Public Interest Fellowship Committee raising money to help law students clerk in public interest law jobs, and worked on the Journal of Criminal Law and Criminology. After graduating in 2002, she then spent two years practicing as a Skadden Fellow at Atlanta Legal Aid Society, launching a consumer advocacy program and assisting low-income individuals with a variety of legal matters. The manuals for advocacy that she created during that two-year fellowship are still used today at Atlanta Legal Aid, more than fifteen years later.

After her fellowship ended, she moved to Florida and worked as a prosecutor at the State Attorney’s Office in Jacksonville, handling both misdemeanors and felonies and gaining experience in Florida criminal defense. She worked directly with Mr. Harry Shorstein, the State Attorney at that time, on one notable case that involved a six-month grand jury investigation of the Shipyards in Jacksonville.

She then started at the Bedell firm in 2006. She focused her practice on criminal defense and Florida Bar disciplinary defense until launching the family law practice at Bedell in 2016. She is married with three children and focuses most of her time outside of work on her children’s various activities and volunteering and most enjoys her time traveling with her family.

Ashley is AV-rated by Martindale Hubbell. Ashley launched the Family Law practice for the Bedell Firm in 2016. She was awarded the Barry Sinoff Award of Excellence in Family Law in 2019. In 2020, she was named one of Jacksonville’s top “Women of Influence.” Ashley was chosen as one of the 20 women who through their work, words, and accomplishments serves as an inspirational leader for the First Coast.

Ashley Cox is a current member of more than half a dozen professional associations, including:

Ashley has a tremendous heart for the community. She has worked as a volunteer Guardian ad Litem (GAL) for seven years, representing the best interests of children who are the subject of abuse or guardianship proceedings. Outside of the legal community, Ashley gives back in a variety of ways. For three years, she served as the School Advisory Chair for Atlantic Beach Elementary School and two years as the President of Friends of Atlantic Beach Elementary School. In 2020, she was honored as the Volunteer of the Year for Atlantic Beach Elementary. She is currently the Reflections chair for the Duncan U. Fletcher Middle School PTSA and the Vice-Chair of the School Advisory Council. She also serves on the Providence School Parent Council. Lastly, she volunteers weekly at the Beaches Emergency Assistance Ministry food pantry in Jacksonville Beach.

In 2019, Ashley provided insight and advice about prenuptial agreements in the Jacksonville Business Journal. She also appeared on Jacksonville’s NPR show First Coast Connect to discuss the topic of bifurcation in divorce cases. She published “Defending the Prescription Case,” in the Winter 2014 edition of the Florida Defender magazine.

As Florida’s oldest law firm in continuous existence, the Bedell Firm has a rich history of high-quality legal services. Our core practice areas include civil, criminal, and family law litigation. Call us at (904) 353-0211 for more information on the services we provide.